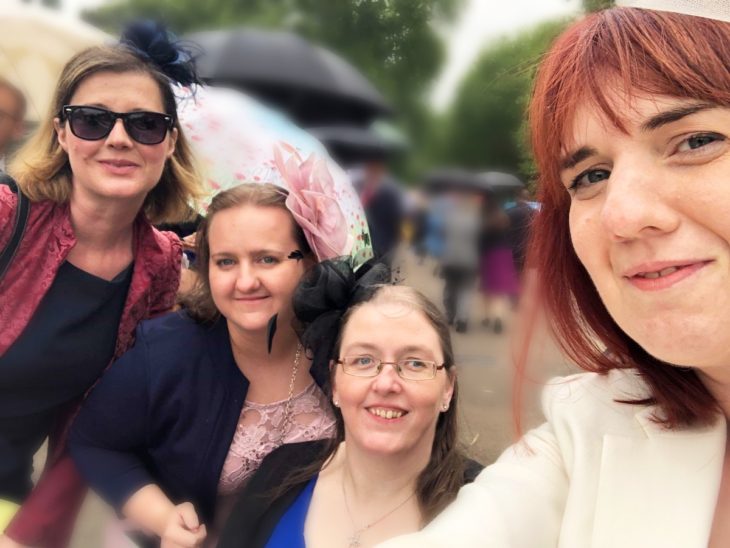 We are so very pleased to announce that the volunteers of Proud & Loud Arts, and the positive work they have achieved with us, has been recognised with the highest award given to UK volunteer groups, the Queen’s Award for Voluntary Service (QAVS). The QAVS is equivalent to the MBE.

This unique UK national honour was created by Her Majesty to mark the Golden Jubilee in 2002 and tomark the outstanding contributions made to local communities by groups of volunteers.

Our diverse range of volunteers span from individuals attending sessions as support, too raising money and even becoming trustees.

Two of our volunteers, Janet Charlesworth and Kelly Hoye, are also long established artists in the company. As well as working furiously to develop their own creative ambitions and those of the other group members, each donates their free time as Trustees on our board.

Kelly was one of our team attending Her Majesty the Queen’s Annual Garden Party at Buckingham Palace;

“This was a true honour to be able to go and represent Proud & Loud Arts at such a big event… It’s not everyday you can say you went for afternoon tea with the Queen and other members of the Royal family”.

Also in attendance was member artist Chrissy Carol Jones; whose work with the us, is going from strength to strength as we support her development of the performance, Shadow Girl;

“I really enjoyed the garden party and seeing the Queen in real life. I’m not sure I will ever get that opportunity again”.

Accompanying our artists were Jennifer Battle (our support co-ordinator) and Katherine Godfrey (one of our support performers);

“I enjoyed having a cuppa and a natter with a member of the Queen’s clergy. They cheerfully informed me that they’ve been coming to the garden parties for years and this was the first time it had rained.”

Whilst the drizzle continued to fall there was no dampening the excitement of the garden party guests, who were treated to tea & cakes and an address by Her Majesty, Queen Elizabeth II.

The number of nominations and awards has increased year on year since the awards were introduced in 2002, showing the importance and value sharing your time has to organisations such as ours.

What a fantastic opportunity for us to thank each and every volunteer who has generously donated their time and energies to further our work and support our artists.

Without your passions we would not be able to increase opportunities for new, emerging & skilled artists, living with disability or to deliver the vibrant performance art work we have created.

“Once I arrived at the palace one of her royal guard offered to assist and escorted me to where the party was taking place. This was incredibly overwhelming, in a good way. The whole day was so magnificent, lovely and one that I will always remember and treasure forever.”

As we grow in member numbers and ambition, we are continually on the search for new volunteers who want to part of Proud & Loud Arts – “Leaders in the creation of disability-led theatre” – Matthew Eames, The Lowry.

We’ll be putting call outs for individuals who have specific skills we are looking for, but the biggest skill we require is a passion for supporting artists, connecting people and creating conversations that lead to positive change.

If this sounds like you, and you’d like to be part of a life changing charity then please drop us a line on social media or by emailing our volunteer trustee, Janet on janet@proudandloudarts.com