A Royal Meeting for Proud and Loud Arts 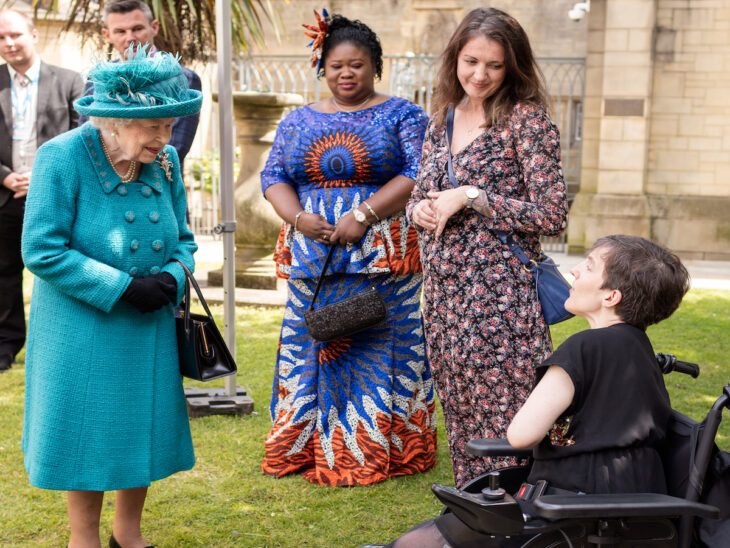 Remember back in 2019 when we were awarded the Queen’s Award for Voluntary Service?

The QAVS is the highest award given to UK volunteer groups and is equivalent to the MBE!

Members Chrissy Carol Jones and Kelly Hoye travelled down to receive the honour and give thanks to Her Majesty to Queen. You can read more about that visit here.

Well, it seems we’re making a habit of rubbing shoulders with the royals!

We had the absolute honour of attending Manchester Cathedral and marking the 600th Anniversary Celebration of the Collegiate Church, and were pleased that Her Majesty was in attendance.

Artist and Board Member, Janet Charlesworth,

“Imogen Barton-Wells and I were invited to Manchester Cathedral on the 8th July 2021 for the 600th Anniversary”.

The pair were excited to be part of this celebration and to represent the Arts sector of Greater Manchester. Janet explained that although excited she didn’t know what to expect and whether access would be appropriate.

“The team were already aware that there was a person with disabilities attending and we were able to get out of the taxi straight on the door entrance.

They continued to look after us very well. On being offered a cup of tea I explained I’d never be able to use the tiny cup and handle and asked if they had anything bigger.

I was prepared for them to say ‘no, they hadn’t’, but they found me a mug with a big handle which was brilliant”.

On the arrival of Her Majesty Queen Elizabeth II the Manchester Lesbian and Gay Chorus treated the conjuration to a song and Her Majesty unveiled a commemorative plaque to mark the occasion.

Her Majesty then met with members from different representatives from around Manchester who had helped communities throughout the pandemic.

Janet was specifically invited to represent Proud and Loud Arts and the Arts in Greater Manchester. Celebrating the work we and other arts organisations have undertaken to ensure arts was accessible during the pandemic.

“I was invited to represent the Arts as a whole. Throughout the day we were able to meet other attendees and hear about their specialisms. When introduced to Her Majesty I spoke about what I did with as an independent arts practitioner and my work with Proud and Loud Arts”.

Janet, Imogen and the whole Proud and Loud Arts team want to extend a huge thank you for the invitation and the occasion. The work of charities, communities, volunteers and individuals makes a huge difference and it was an honour for Her Majesty The Queen to acknowledge this great work.

Congratulations to Manchester Cathedral for their 600th anniversary, may there be many more!