Beyond The 4th Wall – A Review 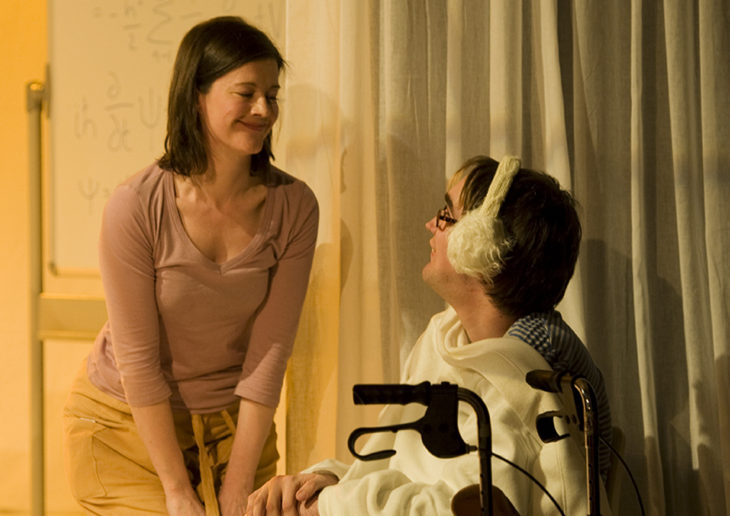 How much care is too much care? What makes ‘Beyond the 4th Wall’ special is that the project was conceived, devised and written in collaboration with the participants of the workshop who became the lead actors of the play. Devised more than a year ago over a series of workshops, the playwright Cathy Crabb managed to create a wonderful world of an on-stage cul-de-sac of Care.

Relevant to those that require care as well as those who give it, the voices of all involved made it into a masterful script which was beautifully interpreted by the director Tom Hogan.

The roles appeared to be ‘made to measure’ for the actors and Hogan took care to elevate their strong points. I am thinking of Michael Gleave’s ‘Barry’, the joker clown character, who clearly relished the moments of stage improvisation and managed to completely win the audience.

In real life, loves to entertain, usually with song and dances, describing himself as a star and nice. Or Toby Taylor’s ‘Leonard’ who, with perfect comic timing, adopted Leonard’s character of the organised jobs-worth who misses nothing from his egg-shaped swivel chair. Beyond the 4th Wall is a play about care and control.

It is a play about life beyond closed doors which at first sight may appear safe and secure but where human spirit and the curiosity to experience the world wins over the limitations of a care institution. But this play is not a tragedy, the ‘residents’ of this safe Big-Brother-like cul-de-sac decide not to conform to its regulations.

It is in the nature of human beings to question the system they live in. Our ‘residents’ find friendship and love in a place which appears so sterile and devoid of human emotion. The clinical-white design by Nerissa Cargill Thompson heightens the absurd sterile feel and when colour appears, it it a feast for the eyes and sets off fireworks of life and fun.

The theatrical 4th wall is broken by this triumph of fun and happiness, the sterility of the care system is broken, the windows into the world open and just as the residents can look out and take their first few tentative steps, the outside world is allowed to peak in and see what goes on. The other performances weaved in worth mentioning are Aisling Leyne’s puppetry and Siobhán Rock’s BSL performance.

‘Young Taylor’ puppet manages to bridge the journey from home into an institution and sets the scene for Nick Prince to perform the grown-up Taylor, who initiates the escape from the cul-de-sac. Rock’s British Sign Language interpretation which is incorporated into the performance in the shape of a character employed by the cul-de-sac again brings in not only another way of communicating with a wider audience but moments of pure humour.

Try to argue with a woman who talks all the time (Kath Godfrey as Yvonne/Doctor) when you speak a different, three-dimensional, language. Particularly relevant following the government cuts to disability allowances, this play not  only explores the world of care but shows how our lack of care towards the disabled can be damaging.

Proud and Loud have given a fully-rounded, beautiful piece of theatre, created out of the need to speak about the issues directly affecting those who need care and those who give it. Definitely worth seeing, now on tour, Beyond the 4th Wall is a theatrical gem.

Tags: Beyond The 4th Wall, Review, The Lowry, Theatre