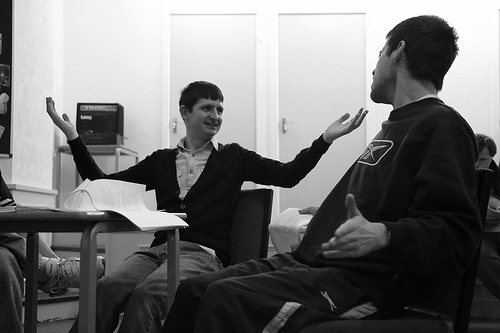 We had 4 full days of rehearsals, Monday-Thursday, starting at 10.00am and finishing at 4.00pm.  These were to enable everybody to become familiar with the script. The majority of the members were in the previous production of the show, but we have a couple of new members who hadn’t seen the script.

“I enjoyed working with Chloe, John Lee and Michael in the ‘fun area’”

For the first half of the week, we did a couple of read-throughs of the script and made a couple of changes to some lines.

On the Wednesday and Thursday we were able to start getting the show on its feet (or wheels).

Young Taylor decided to come out of his hiding place and join us in rehearsals on Thursday.

“I thought rehearsal week one went really well. The new scenes & new characters look great and everybody worked really hard. We did a lot of work with the script & made some changes to it. We also got to work with Young Taylor (the puppet) which was fab, it was great to have him back! We had a lot of fun and really can’t wait to see the show come together in the coming weeks.”