‘Bring on Shadow Girl and her trusted shadows’ 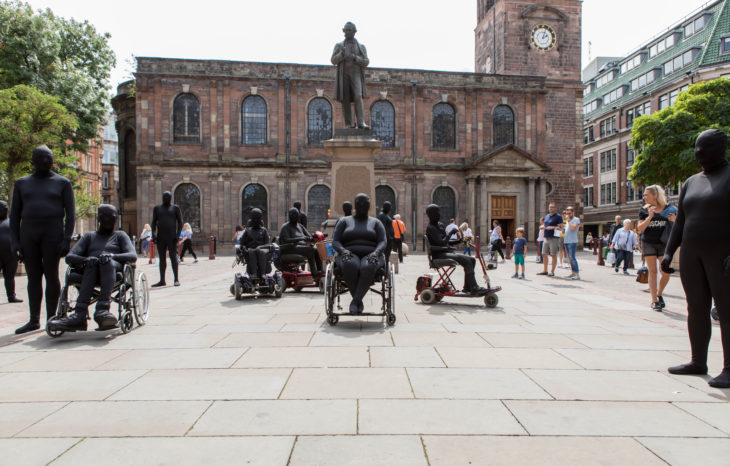 Thursday’s rehearsal was by far our most exciting yet as we performed our first dress run, made even more exciting as we were utilising the fabulous theatre and studio spaces at the University of Bolton, Queen’s Campus.

Our collaborators in presenting Shadow Girl as part of their Hazard 2018 events, Word of Warning (@WarnMcr), came along to Bolton to film rehearsals and interview Chrissy and Kelly about their experience of the process.

Preparing us for what was set to be a busy day, Susan began our movement rehearsal with some Feldenkrais practice; a method which organises connections between the brain and body – adopting such mindfulness about our bodies would prove valuable for the rest of the day…

Costumes donned, groups formed, formations rehearsed, small audience consisting of Proud and Loud Arts and Word of Warning conjured, anticipation in the air. These can only be for one thing: The dress rehearsal! Time to put all of our hard work to the test, we had such fun! Playing in the area between the University buildings provided plenty of opportunities for our imaginative shadows to explore and create an interesting, fun and unique performance.

One of our shadows, Kelly, has shared her thoughts about Thursday:

Wow, what a day Thursday was! It was so busy as some of us got the opportunity to be interviewed on camera by one of our funders and it was also the first dress run for Shadow Girl which is taking place in a week’s time. So the time had come to bring out the costumes and create some beautiful movements and formations. For some it was quite an anxious time as it was the first time they had been given the chance to spend some time with the full suits on, needless to say it was going to be a warm one, as it was the hottest day of the year. As ever the professionals we are, we fought through the heat and sweat to start exploring playfully with the shadows.

It was such great fun regardless of the temperature and a few costume. We are all now looking forward to next week for more fun and playfulness. Bring on Shadow Girl and her trusted shadows.

As we enter our final week of rehearsals, we are looking forward to Saturday 4th August with excitement, nervous anticipation and plenty of inspiration.