Cells – A Body of Work at University of Manchester 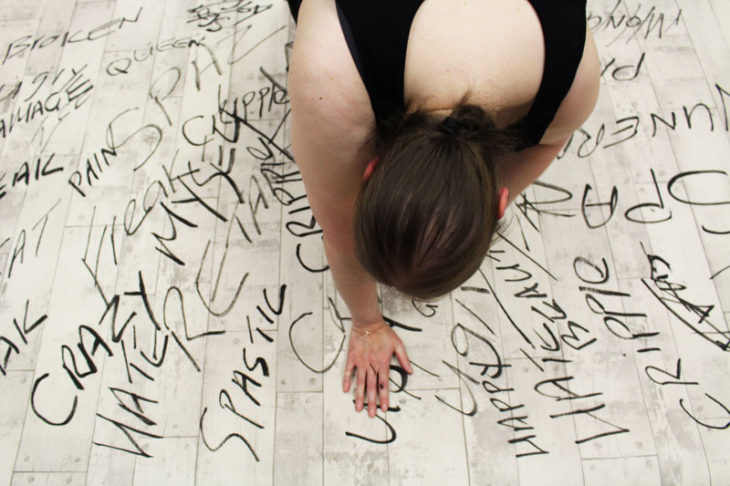 It’s been quite a week for us all at Proud & Loud Arts! On Monday (24th April) we headed to the Martin Harris building at the University of Manchester with our live art installation ‘Cells: A Body of Work’ to perform for over 30 theatre and performance art students.

Visiting a University was  a new and exciting experience for the majority of the group and a lot of us were getting nervous about it  before we had  even arrived. It helped that we arrived quite early as we were able to have an hour to settle in and get used to the surroundings before we had to set everything up.

When it comes to setting up, some of the pieces are more complicated and take longer than others so it’s important that we have a plan so that everything goes as smoothly as possible… after a small technical issue and a slight panic over a missing costume, the pieces were up and we were ready to go!

Waiting for the audience to filter through and find your piece is always nerve wracking, but once that first person comes in you somehow put the nerves to one side and before you know it, the audience are queuing up and enjoying your piece. The pieces were all situated on level one of the Martin Harris building, some on the corridors and others were in various rooms waiting to be found. We took all but one of the pieces, Space Adex by Michael Gleave as he had already performed twice in the lead up to this performance, once as part of Haphazard and then again a few days later at GK Gallery & Tea Rooms so he took a well deserved break but came along to see the performances and to take part in the workshop which followed the performance.

We performed for an hour and then went straight into the workshop which was based on labels, a theme which we explored quite deeply during the creation of ‘Cells’. We then ended the day with a discussion, talking to the students about our pieces and answering any questions they had.

The University was really enthusiastic about the installation and we received a lot of positive feedback. It’s really exciting for us that our work is in demand and is creating discussion about topics that can be quite challenging.