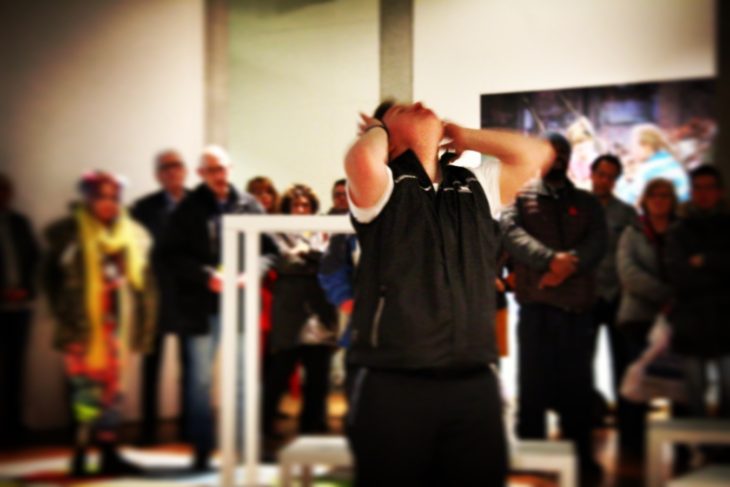 Proud & Loud Arts recently had the honour of an invitation to return to Manchester Art Gallery with our new production Affirmations.

This brand new piece of work was created with movement specialist Susan Swanton and her focus was getting us to create something together, as a group of artists, that would sit alongside the individual performances from our production of Cells.  Cells was developed in 2016 and is about what it is like to be labelled as different, from our own personal experiences.

We had the pleasure of working with Bolton University again and the development and rehearsal period, whilst at times being hard work and emotionally challenging, was ultimately worth it as we created a very high quality installation.

I had the privilege of working with award winning writer and performer Jackie Hagan who helped me to write this beautiful, sweet and honest piece which was in direct contrast to the original work that was very dark, negative and straight to the point.

The process took quite a long time as I struggled emotionally and mentally to write down what exactly it was I was trying to get across, whilst all the time trying to not let it be negative or in your face, and to add humour and loveliness to it instead.  The result saw me wearing a frosted pink dress which I wasn’t keen on at first. I decided to include it in the text by calling it a strawberry trifle and saying I just wanted to get it off, and ultimately this ended up being the case as during the performance I was left wearing just my bra and leggings.

This was a huge challenge for me because while it certainly added strength to the performance, it also meant that I had to allow the audience to see me bare my body which is always difficult for me as I have low confidence.

On the night Affirmations went really well.  The music that accompanied it made the space have a strange sense of atmosphere and worked well alongside the soundscape we had created.

After the group had performed Affirmations together we took our places around the gallery to present our personal pieces.  My work is called Distorted Beauty and it is an adaptation of the original 2016 piece.

Distorted Beauty was a roaring success with lots of people raving about it. Some people who had seen the original work were surprised at how much it had changed and how I’d also had the courage to take it to the next level. I was told I should be proud of myself for what I had done because they couldn’t have stood there in their underwear with everyone looking at them.

I will be developing Distorted Beauty further so that it becomes a project in its own right and am actively seeking partners and collaborators to take the performance out to new audiences.

I’m so overwhelmed with pride for what both me and Proud & Loud Arts have achieved personally and creatively over the years.  It’s been hard work but amazing and I definitely wouldn’t change it for anything.