You are in Home / News / Field Trip to Apple! 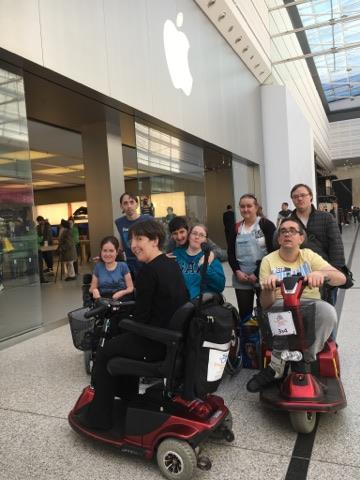 Last Thursday we had a bit of a change from our usual drama session.  We took a trip to the Manchester Arndale to take part in an Apple fieldtrip, looking at how we can use Apple products to create and promote our own work.

When we go out on trips as a group, it usually takes quite a bit of planning. Travelling from Salford to Manchester might not seem like a big deal but with accessible transport expensive and often hard to come by, it can be tricky. For this trip we decided to travel in small groups, some going by tram and some by car. The journey went pretty smoothly and we all arrived early and met up for lunch in Nando’s before we were due at the Apple store.

After filling up on chicken, we headed to the Apple store to start our fieldtrip. We were met by two members of staff who took us to the back of the store where there was a big screen waiting for us with our logo on it! After an introduction to the fieldtrip and a chat about what kind of work we do, we were introduced to an app called ‘Pages’. This app enabled us to create our own posters which could help to promote our live art installation ‘Cells – A Body of Work’.

Some of our group are familiar with Apple products such as iPads & iPhones however none of the group had any previous experience of working on Mac computers so it was pretty alien to us. The staff were great at talking us through it and spending time with everybody helping them to understand the basics and within just one hour, each member had created their own poster!

We then gathered back around the big screen where everybody’s poster was shown back to the group. Each document that the group created was saved onto their own memory stick provided by Apple so that they could continue working on it at home and save their work onto their own computers. We were also each sent away with an Apple t-shirt!

We really loved our time on the fieldtrip and would like to thank the staff at Apple for making it such an enjoyable experience. We can’t wait to come back!