You are in Home / News / Finding The Funny Over Zoom

Finding The Funny Over Zoom 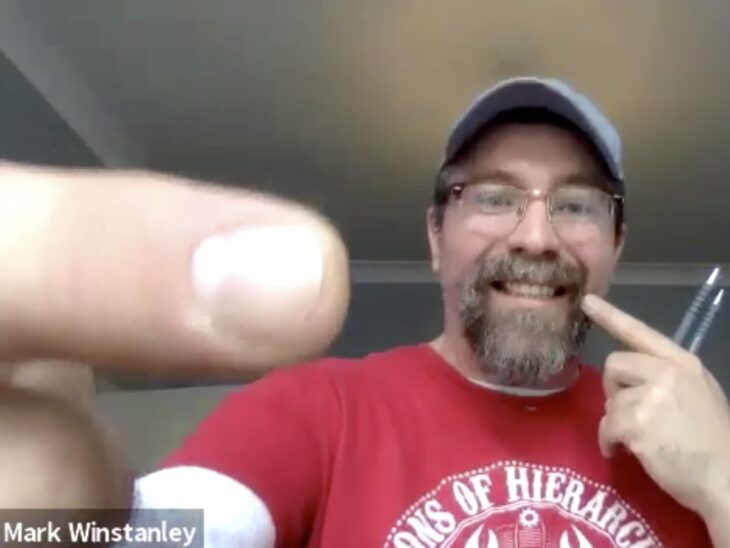 Zoom calls are a bit boring hey? How often do you end your zoom meeting in hysterics, laughing your head off? Probably not as often as you’d like.

Well we’ve been trying to do something about that here at Proud and Loud Arts and Mark Winstanley is here to help, but first here’s what we’ve done so far…

…we got our Toby to lead the Dance Mornings.

Toby even got a recognition from the Lord-Lieutenant of Greater Manchester, Sir Warren Smith KCVO KStJ JP, read more about that here.

This is proving so much fun and Toby’s now moved them to the evenings to keep those dull, dark autumn nights at bay.

… we worked with our team of professional facilitators to create Art, Film, Movement & Fun workshops. These allow our cohort of members to explore their chosen fields further and are proving so useful we’re still doing them to this day! We’re going to showcase some of the fantastic work that’s coming out of these sessions with you soon, so stay tuned!

…we’re thrilled to have clown, theatre maker and teacher, Mark Winstanley leading a virtual clowning course with our members!

Mark Winstanley specialises in clown, bouffon and playful approaches to theatre. Mark is also a core member of bouffon clown company A Ship of Fools Theatre Company whose work is both playful and provocative.

Having trained at the Welsh College of Music and Drama and the École Philippe Gaulier, Paris Mark became an associate lecturer at the Royal academy of Dramatic Art, RADA – that’s the really fancy one!

Mark has been leading the members in a workshop designed to ‘find the funny over Zoom’. This is helping our members subvert the platform from a boring, work chore to a hilarious playground for performing comedy.

WHAT HAPPENED IN THE SESSION?

During the last session Mark encouraged the team to create ‘the most inappropriate Zoom call ever’.

The members experimented with different scenarios for the an inappropriate Zoom call inc. calling from the bathroom, in bed, even from the toilet – brilliantly performed by Daryll… we won’t ask what your up to here…

Mark led the group to play with ‘framing’, where can you sit in relation to your camera to make zoom calls feel ridiculous? They also experimented with volume, and Chrissy ended up shouted for a few minutes whilst others in the group pretended they couldn’t hear her.

The group made a list of funny ‘interruptions’ that they used to put each other off during the call.

Kelly tried her hardest not to react when reading a speech, as Phil made farting noises. They both did a great job!

We even had a frantic run around as we tried to look professional but we also needed to get the dinner ready, the package signed for and the dog walked!

Needless to say we are had an amazing time and learnt just how many virtual possibilities there are for having fun and causing mischief!

Thanks Mark, we’re looking forward to working with you again!