You are in Home / News / Finding The Right Fit : Shadow Girl – Origins 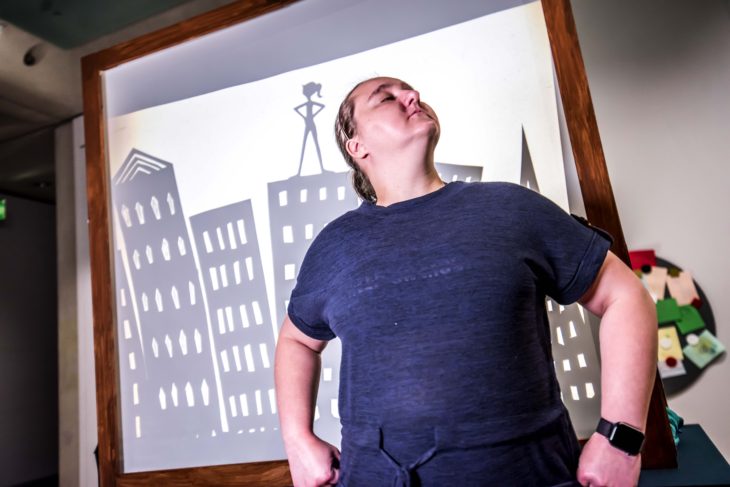 Remember Chrissy put a call out for a Writing Mentor to join the team?

Well, she was inundated with wonderful writers wanting to be on-board, but choosing the right fit for a project can often be a little overwhelming. Each applicant comes with their own styles, their own ideas and ways of working, so how do you find the right fit?

Chrissy came up with a pretty cool process to help with this selection and thanks to funding Chrissy was able to set-up some taster sessions with writers in order to create her dream team.

Chrissy whittled it down to three writers who she felt drawn to. But being drawn to someone on paper isn’t the same as working each other on one of your projects. So each of the writers spent 3 hours working with Chrissy, playing games, doing writing exercises and generally getting to know each other in order for Chrissy to better understand their individual styles of mentoring.

Chrissy has really enjoyed learning from them and if it were possible each of these writers would be working with Chrissy on the project!

However, despite our wildest dreams the budget isn’t limitless!

So let’s take a closer look at how things went, starting by meeting the writers!

David started working in the arts as a designer and scenic artist before discovering a talent for writing and directing. David now works across many art forms from writing and directing to creating installations/artworks. Most recently his work ‘Not The End‘ was released as part of M6 Theatre Company‘s ‘Love in the time of Corona’ project.

David is on the team of ‘outreach workshop leaders’ at Forest Forge Theatre and also uses theatre in workshop settings, helping non theatre professionals express themselves and explore their lives through imaginative play.

Liz is a poet and playwright working across the UK but based up North. They describe themselves as “a Northern with assuredly Jamaican roots”.

Liz has been part of the Critical Mass writing programme at the Belgrade Theatre in Coventry which led to their first full-length play, Red Snapper; about a group of Jamaican women during the Cuban Missile Crisis (a runner up for the 2016 Alfred Fagon Audience Award).

Liz also works locally with communities through their company Theatre In Flow which creates new work and opportunities for marginalised voices.

Sarah studied at The Central School of Speech and Drama before becoming associate writer at Oldham Theatre Workshop and more recently becoming one of the BBC’s Northern Voices Writers 2020.

One of Sarah’s big passions when it comes to writing/directing is working within their local community helping people find their own creative voice. This led Sarah to create The Big Umbrella Theatre company working alongside Adults with Learning Disabilities in the Stockport area.

LONGEST INTERVIEW IN THE WORLD?

We managed to have a chat with each of the writers to learn more about how they found this mini-process with Chrissy.

Was it unusual after sending in the job application and performing well in the interview to then be part of an extended interview process? Surely it would feel like X-Factor?

“Speaking completely honestly, at the beginning it sort of felt like we’re being pitted against each other but when Chrissy and I started, for the first time in any process, I genuinely felt like the pressure was lifted from me.

It doesn’t feel like we [the writers] are competing with each other because it’s so important that Chrissy finds the right person for her. I’m sure the other writers will agree that regardless of what happens now we’re on board and we will coming to see this work!”

All our writers thought this process was pretty unique and although it did feel like (as David put it) the ‘longest interview in the world’, they all agreed it was beneficial both for Chrissy and themselves.

“It’s also beneficial for me as it gives me a sort of head-start. I’ve had time to learn a little more about Chrissy (and vice versa) and started to develop a language that helps us work together”.

As expected each writer had a different approach which means Chrissy was able to experience firsthand what it will be like to work with them on the project.

“You have to gel, you can’t always get that through an interview. Sometimes you just need space and time with someone”.

“There’s never enough time, so having that little bit extra is always a huge help”.

“I loved that Chrissy’s ideas are wild and unrestricted which is great! As a writer you can sometimes lose that because of the pressures from venues, producers and marketing requirements etc. It’s good to be reminded about that joy”

WHAT DID THEY GET UP TO?

Each mentor was asked to work with a particular section of Chrissy’s draft script for Shadow Girl – Origins. Each worked in a unique way, drawing from Chrissy and the drafts to explore different things.

Working with Liz, Chrissy was able to explore all her wonderful ideas, but also examine them each in more detail.

Once Chrissy clarified these bigger themes we were then able to examine each new idea and ask ‘is it helpful for those themes?”

David approached the sessions like they were drama workshops and ended up having a lot of fun exploring characters through games and play.

“You learn a lot about people through games and because Chrissy uses humour really well we were able to expand her characters through playing; fleshing out characters and expanding on improvisations. It’s then up to Chrissy to decide which findings she wants to explore further.”

Meanwhile, Sarah created a testing ground for Chrissy’s writing styles, focusing on finding references Chrissy could use to talk about the work and exploring different writing devices.

“Everybody is different and things that work for me might not work for another writer. It’s a fragile thing when you’re working with someone’s idea so I wanted to make it fun and speak her language. It became about finding different ways in and working on common ground.

We spent some time talking about what excites Chrissy, which includes DC and Marvel superhero films. We ended up using those references in our working and playing the theme music under the text which Chrissy really responded to.”

Did this ‘extended interview process’ work?

We think it has.

Chrissy has been enjoying the process, but admittedly it has been a lot of work for anyone to do. Essentially Chrissy has been involved in three creative processes simultaneously!

We’ll be hearing more from Chrissy next time, once they’ve had time to process all the new ideas and have come to a decision on how to move forward.

Importantly, doing things this way has meant Chrissy is in full control of the project, or as David puts it;

“Chrissy is in the driving seat with people putting a lot of trust in her. Chrissy is the lead in the project choosing her own creative partners”.

Doing things a little differently means Chrissy has all the information available and is in full control.

Yes, it takes a little longer but it’s been a really interesting approach and one Proud and Loud Arts and Chrissy may utilise in the future!

Thank you to all the writers involved. It’s been wonderful learning more about you and we look forward to working with each of you in some capacity in the future!

Next time, learn what Chrissy discovered throughout it all and discover who was the perfect fit as Chrissy assembles her team!

Shadow Girl Origins by Chrissy Carol Jones is made possible thanks to project partners M6 Theatre with Proud and Loud Arts in association with The Big Imaginations Artists Imagination Fund and Z-arts. Shadow Girl Origins is supported using public funding by the National Lottery through Arts Council England.