You are in Home / News / Liv Barr – Our new volunteer 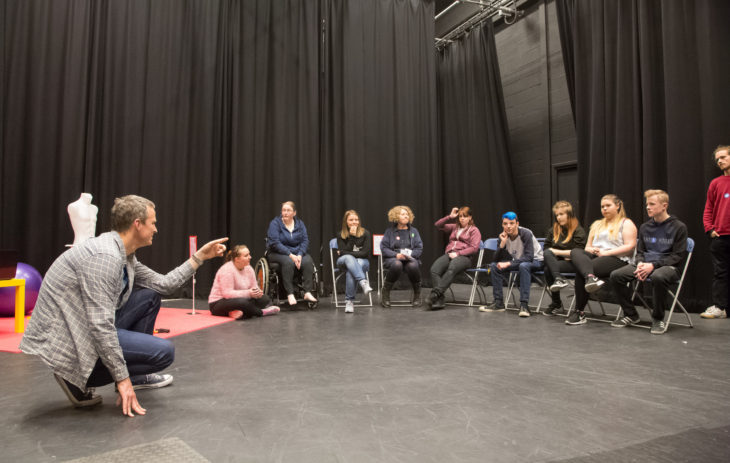 I have been volunteering with Proud and Loud since September and really enjoy coming along to rehearsals to offer support. Not only is it an absolute pleasure to spend to time with the members of the group, (who are all lovely, warm and not to mention hilarious) it has also a great learning experience; it has gave me insight into the processes of creating a professional show, encountering people with disability and working with them to achieve their goals in rehearsal.

Now it’s been asked if could write this blog about my time with Proud and Loud, to see what is like from a volunteer’s perspective. So where do I begin?

Why I wanted to volunteer with P&L?

I had just finished a work placement working on the Manchester Day Parade. It was great to liaise with hundreds of community groups involved and to see them all come together to celebrate all different communities that make up Greater Manchester was inspiring.

So from that experience I decided I would like to become more involved with Community Arts at a base level. I wanted to work with people to put forward their perspective, to talk about their lives and create an awareness of issues which are not a part of a ‘mainstream’ consciousness.

I remembered a friend mentioning that he had seen Proud and Loud at The Lowry a couple of years back and that they were a great company so I contacted them
to see if they had any volunteer opportunities.

My experiences of disability previous to volunteering with P&L.

My experience of disability had been very limited. It was mainly comprised of seeing people with disability when out and about and how they were represented in the media by television programmes and the Paralympics.
Then my Mum became diagnosed with Primary-Progressive MS and I had to begin consider how over time her needs will change and how we as a family can forward plan and think about the adjustments which will need to made in our lives to accommodate her.

Over the summer I had met with Tom (The Artistic Director) to discuss my role and how I could help the production. I was invited to come along on the 8th of September to meet everyone and get an idea of how each session works.

I wasn’t too sure what to expect.

Having studied Theatre I’m pretty familiar with how a rehearsal operates, the challenge in my mind was how you facilitated peoples understanding and restrictions. However I was very excited to start and to meet everyone.

So on the 8th of September, after going round and round the wrong ring roads and getting very angry with a cheap sat nav I finally arrived at The Sutton Centre in Salford. I was greeted by Tom and made a cup of Tea by Jenny. I was feeling very nervous but as soon as I was approached by Janet I was put at ease. Janet is straight talking and to the point and she alleviated some of the fears I had. She told me not to be shy, If I couldn’t hear or understand something she said, I should ask her to repeat it and not to worry about her dropping her stick, she does it all the time.

I suppose as someone who has a limited experience of meeting or working with people with disabilities I’m often scared that I’ll say or do the wrong thing and offend someone. But actually I’ve realised by being open and honest you can avoid these situations.

After everyone had arrived we sat in circle and introduced ourselves and then got to work. We read through the latest section of the script, discussed who the characters were and what we think they are like and then split up into groups to improvise a scene using the characteristics of the characters we had just discussed.

I was working with Toby and Chrissy, we discussed what we thought the characters were like. Chrissy said the character of Don liked to wind up the character of Emma. She thought that Emma could be quite dramatic at times. Toby said that they spent a lot of time in front of the TV. So with this in mind Chrissy and Toby thought about how they might improvise a scene.

It quickly became clear that Chrissy and Toby were great actors and it was impressive how quickly they could imagine and improvise a scene.

Everyone showed their scenes back to the group and we got to see everyone’s own characterisation of Don and Emma. It was great to see how enthusiastic everyone was and the difference in all the Don and Emma’s was great.

We broke for lunch and chatted over Jacket potatoes. I left with the impression of what warm, enthusiastic and friendly bunch of people and I couldn’t wait to come back next week.