You are in Home / News / Mind The Gap perform ‘Contained’ at The Lowry + a quick catch up!

Mind The Gap perform ‘Contained’ at The Lowry + a quick catch up! 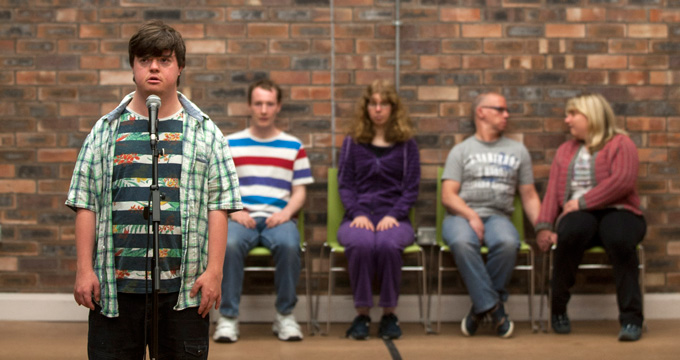 The past couple of weeks seem to have flown by at Proud & Loud Arts with lots going on. We have been busy planning and getting into rehearsal mode, ready for our upcoming performance of ‘Cells’ at Edge Hill University. We are really looking forward to this performance as it will be our first time performing outside (if it doesn’t rain!) which will be a new experience and will probably give the performances a different feel.

Trip to see Mind The Gap perform ‘Contained’ at The Lowry

On Thursday 25th May we spent the day at The Lowry, taking part in a workshop with Mind The Gap, followed by a pre show discussion with Liam Bairstow & Melanie Hill (Coronation Street) before the evening performance of ‘Contained’. We all had a fantastic day, the workshop led to the whole group creating a performance within an hour, using the same techniques that Mind The Gap had  used to create ‘Contained’. The pre show talk with Liam Bairstow was brilliant and gave a great insight into how his life has changed since being on Coronation Street and how he splits his time between Corrie and  Mind The Gap! After a quick bite to eat and a drink in the bar, we headed back up to the studio for the performance of ‘Contained’. It was a great show which took the audience on an emotional journey telling personal stories with the use of music, dance and film.

Image – Contained by Mind The Gap taken by Tim Smith

Several of our members have also been busy fundraising! Each of us has a target of £750 to raise and the whole group are well on their way. In the past two weeks alone there has been a 10k which Chrissy got her running shoes on for again, smashing her previous records and raising £100, and a quiz night organised by Janet which raised over £200! The group are planning lots of different fundraising activities so if you fancy getting involved, we’re pretty sure there will be something for you.

Tags: Fundraising, The Lowry
Sign up for our newsletter