You are in Home / News / New Challenges, Sergeant Major Cathy and a Kiwi Fruit – Shadow Girl 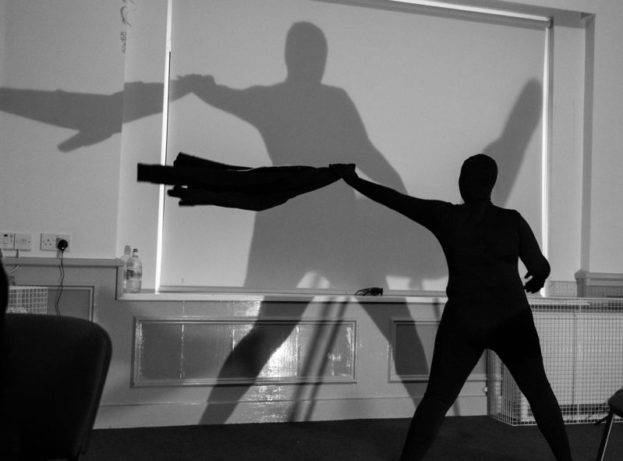 We’ve plenty of delightful work to share from today’s rehearsals in preparation for Shadow Girl’s Manchester City Centre take over on Saturday 4th August – but first a little birdy, well, Twitter to be precise… (Do you see what we did there?) told us that it is National Old Joke Day so we thought we’d share our best pick of the worst old jokes we could think of:

Doctor, Doctor I feel like a pair of curtains

Doctor: Ohh, pull yourself together

On a day where our ‘whoosh’ caught up with our ‘woooo’ – you’d think we were quoting from Dr. Seuss when in fact we are penning a new story – we once again found ourselves in groups finessing our formation skills, adding an additional element this time however, obstacles: *Must remember: Line, V, Cluster*. This proved challenging at first particularly as the aforementioned obstacles were the other groups! However, following a tentative start we soon began using our performer’s instincts and although the rehearsal space was brimming with multiple groups navigating the space, each one was totally focused and immersed in their formation bubble, a truly spectacular piece to watch.

Artistic Director, Tom, performed a masterclass in approaching a familiar object in a unique way, managing to become stuck to a chair via his chin! In groups we all followed suit, allowing a marshmallow to become a tiny hat one moment, and a football the next and a dried kiwi-fruit to become a bomb. From here we took to the stage to share our findings – which resulted in Toby ‘changing the game’ and showcasing his skills in audience interaction, much to the audience’s pleasure!

A change in pace to begin the afternoon rehearsal saw us reaching once again for our relaxation tennis balls, tapping back into our meditative practice to refocus. Our final workshops revealed a hidden gem which is not to be missed on 4th August – Sergeant Major Cathy! Cathy ordered about her fellow performers as if they were her battalion, magnificently commanding the stage leaving us all wanting more.

At the end of rehearsals we all managed a sneak peek at the fantastic programme which will be handed out alongside the performance – Manchester is in for a treat!