You are in Home / News / One Week On – Shadow Girl

One Week On – Shadow Girl 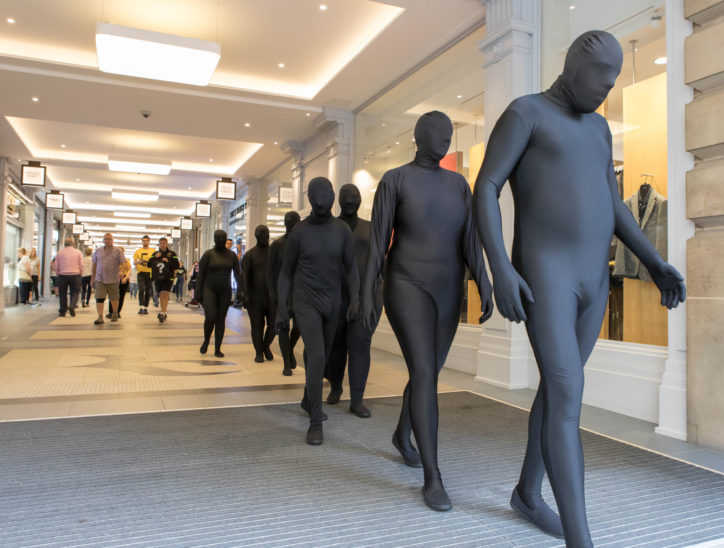 After having such a fantastic time performing Shadow Girl – the city streets, we are all still flying high and have enjoyed spending some time this week reflecting about not only the performance itself but the way in which we came to recruit performers from DIY Theatre and Bridges Company – The Octagon Theatre and also the rehearsal process in its entirety.

Coming together again on Tuesday with all of our performers, creative team and collaborators from Hazard Mcr 2018 to share our feedback was lovely. In evaluating the project on the whole performers described it as:

‘actually amazing and so cool, I want to come back and do it next time’ – Shabs (Bridges Company – The Octagon Theatre)

‘It was a great experience and very different from what we do at DIY, I’m used to using scripts’ Angela (DIY Theatre)

‘It was harder than I thought it was going to be, it took a lot of trust but I’m proud to have accomplished and achieved it’ – Kelly (Proud and Loud Arts)

We discussed further the theme of trust that ran throughout the entire project, delving into the complexities of our trust in each other: that we’d continually support and look after one another throughout.  Trust in our audience: would they like us, respond to us positively and understand us. And also trust in the overall creative process and success of expanding Shadow Girl. We found that allowing ourselves to trust these different elements we were able to relax and create the best performance possible.

We viewed some of the images that had been captured throughout rehearsals finding plenty to laugh about and attempting to recall some of the more obscure situations we found ourselves in. We spent some time in groups remembering the rehearsals, where we spent our time and what we did there, our numerous: costume fittings, formation training, movement, relaxation, clowning, dress rehearsals, filming and audiences… the list goes on.

We’ve had such fun and were thrilled on the day of performance when our audiences were revealed to be so engaged with us, many photo’s were being taken – selfies included! We’ve received comments ranging from ‘that’s so cool‘ to ‘it’s really valuable, it’s really great that you are doing it‘ [both anonymous]. With our very own Shadow Girl creator, Chrissy, having the opportunity to step outside of the performance and watch our third and final take over, finding it ‘very powerful’.

It’s not been restful reflection for us all this week, as Kelly and Chrissy were called upon again to interview with Reverend Coyne for Cross Street Chapel’s podcast:

On Thursday Chrissy and I had the privilege to do another interview with a gentleman called Colby who came to see our recent performance of Shadow Girl. The interview was done for a podcast which was a new thing to Chrissy and myself as we never even heard of it. After few nervous moments we soon got into the swing of the interview. Chrissy explained how shadow girl came about and how she thought the performance went. Where I spoke about Proud & Loud and how long we’d been running and what roles we have in the company and what was next for us.

Overall I think the interview went really well myself and Chrissy are becoming more professional at it and are loving been given the opportunity to do these kind of things. We both feel we work well together and hope there’s more opportunities to come.

Phil has also been with us this week filming interviews with most of our performers and will release a video filled with much more about Shadow Girl – the city streets including brand new footage from our rehearsals and performances. Follow us on Twitter, Facebook, Instagram and Youtube to ensure you don’t miss out on Chrissy and Kelly’s podcast debut and our official Shadow Girl – the city streets film.