You are in Home / News / Our Comic Book Characters Convene at Contact, Manchester 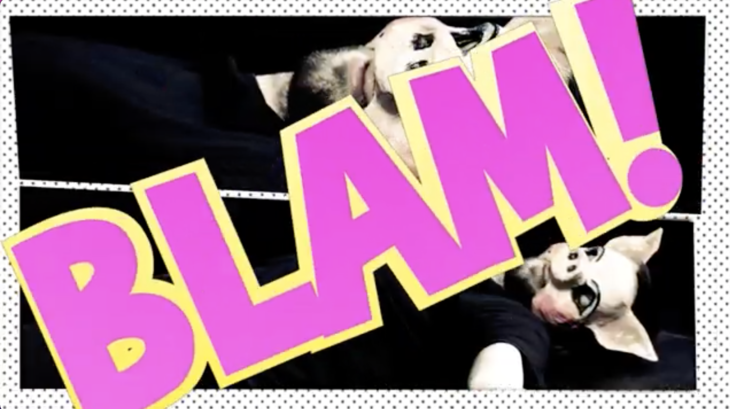 Interarts are a group are disabled adults working together to develop skills, confidence and to build their own careers. Members work with industry professionals from Drama, Art, Music & more. Since January 2022 they have been exploring the devising process.

Imagination and Play are Super Powers!

Our Interarts members have been working at the wonderful Contact, Manchester with theatre maker and facilitator, Tom Hardman along with our Engagement Officer, Imogen Barton-Wells to explore how making theatre works.

After getting to know one another the group we’re asked what sort of stories and subjects they might want to explore along this performance journey. Well, they jumped on an idea from member, Dominic who has a passion for superhero fiction. Off they embarked on a journey to tell a simple tale between superheroes and supervillains.

If you had a super power, what would it be? Could you fly? Or shoot lasers from your eyes? Were you born with your powers, or did you gain them after getting bitten by a kangaroo? These were the starting questions on our members’ journeys.

Let us introduce you to your heroes & villains… can you guess who’s good and who’s bad?

We heard that Miss Kick Box wasn’t born with their powers, but just how they got them is a complete mystery. They just appeared during their very first kickboxing class when she found herself stronger & faster than even the instructor!

And did you know that Interarts’ Pennywise (not to be confused with another character of the same name) wasn’t always a villain? A tragic backstory around a long lost family is at the heart of this character’s life of crime but hope remains; should they ever be reunited, Pennywise will turn to the good side.

With their characters under their belts the group began to focus on mapping out a story. Our members wanted to tell a tale which included an epic battle between good & evil. One to make the audience pick a side.

They began by devising the battle scene, using their initial super poses as starting points, before pairing up with their super counterparts.

Each of our pair would take it in turns to strike a super pose, or make a super power battle move, then the other would need to either mirror the move or react with a counter move; defend, retaliate or simply show-off.

Facilitators, Tom & Imogen asked the pairs to perform their sequences and added different musical scores to see how our performers reacted to the feeling of the sounds.

In the final weeks of term our Interarts group worked with film-maker, Phil Smethurst of Manchester Lights Media to plot out their super story!

Phil has done some excellent work with members in the past, even creating a mini Acting For Camera course which you can catch-up on HERE.

The group created a simple story board for their plot and highlighted the epic battle. Working with Phil to learn a little about different film genres, the group decided to make a short film in the style of a comic. They were really keen that the film had the animated look of a comic book and wanted to use captions instead of audible speech, excited that audiences could read the film as if it were a moving comic.

Together they create a short film, telling their tale of…

The Super 6 are feeling quite bored as they’ve successfully defeated all their enemies and secured them behind bars.

Meanwhile, the villains are now working together as The Fearsome 5, under the leadership of The Punisher.

When they successfully knock out the guard and escape prison, they work together to seek out the heroes and take revenge.

As the heros and villains meet an epic battle ensues… but who will win?

Obviously we’re not going to spoil the ending! But just look at all those fantastic movement sequences the group have created! The Avengers need to watch out, there’s some new supers in town.