You are in: Home / About / Meet the team / Lorraine Worsley-Carter MBE DL 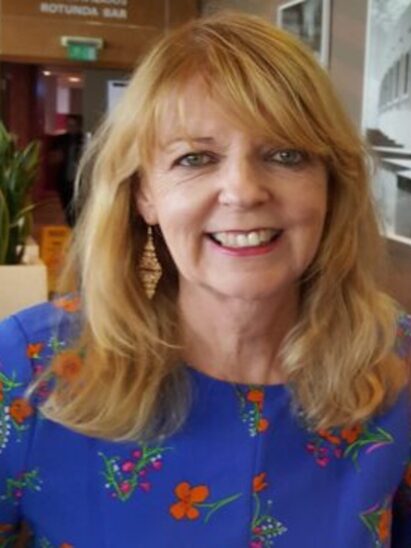 I am proud to be an Ambassador to Proud & Loud Arts, as soon as I saw their first production, at which, as part of the audience, I was challenged immediately and throughout the performance and  I knew that I wanted to be involved with this forward thinking, ever evolving group, that pushes artistic  boundaries and buttons and continues to strive for excellence.

Lorraine is a former freelance broadcaster, mainly with the BBC, as well as film editor with Granada Television.

Lorraine’s care for and involvement with the communities of Greater Manchester, and further afield, have seen her undertake the role of CSV’s Regional Manager, line managing social action desks across the ten BBC radio stations of Northern England. She has also been Chair of the Prince’s Trust for Greater Manchester, is a former Manchester Magistrate, and a NED on both the Stockport and Greater Manchester Strategic Health Authorities. In 2020 she was chosen as one of the top 100 female entrepreneurs in the ‘f:Entrepreneur #ialso100 campaign’ a celebration of inspirational businesses led by women in the UK.  As well as being a Proud & Loud Arts Ambassador She is also Ambassador of pankhursttrust.org and  https://bridgegm.co.uk

She is the owner of Countess Publicists www.countesspublicists.co.uk, as well as a theatre reviewer and travel writer.

What made you want to be part of the Proud and Loud Arts family?

They are a forward thinking arts family, devoid of labels.

Who is your creative arts hero?

Your most memorable Proud and Loud Arts moment?

What are you most proud of?

My husband, my daughter, her husband and their dog Melo