You are in: Home / Productions / Shadow Girl – Origins

Discover how an ordinary girl becomes Shadow Girl in a new show about courage, friendship, and adventure. 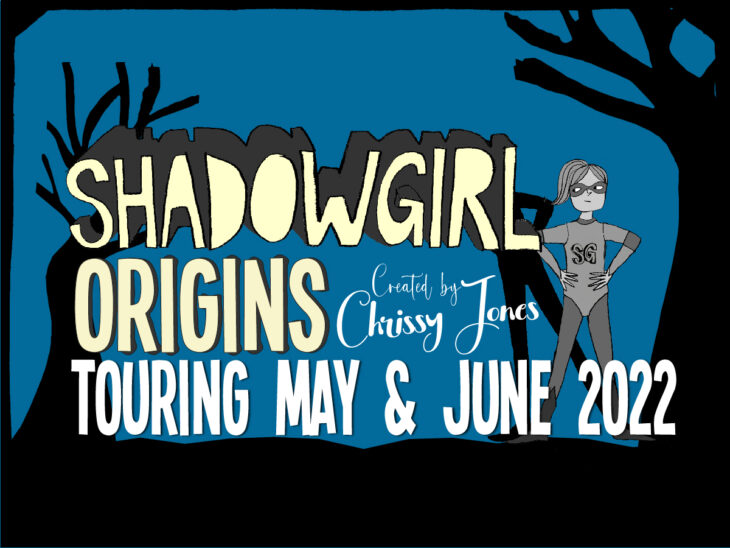 “Shadow Girl is important because it communicates with or to the audience that they have what they need inside themselves to make a change.”

Shadow Girl is a new adventure story about a girl called Sabrina, who has a vivid imagination. It is a playful and adventurous show about friendship, growing up and discovering what it means to be brave.

Sabrina is growing up fast, but her parents haven’t noticed yet.

Feeling invisible and alone, Sabrina hastily forms a plan to escape with her newfound companion, Alf. Together they venture out into the world to discover what it means to be brave.

Separated from her new friend and thwarted by powerful forces, Sabrina discovers the power of her shadow and steps into the light.

For families and children aged 8 and up

Shadow Girl is a Makaton friendly show. It includes Makaton sign throughout to communicate Shadow Girl’s emotional journey and convey the message of the show.

Chrissy Jones is a Manchester based artist living with a learning disability label.

She is a skilled performer and long-standing artist with Proud and Loud Arts, and has worked with Contact Theatre, DIY, and Access All Areas in MADHOUSE re:exit at Manchester’s Barton Arcade.

Chrissy has been playing with her experience of feeling invisible through her Shadow Girl idea since 2016, taking her live art explorations with light and shadow to Manchester Art Gallery, Tate Liverpool, and the streets of Manchester.

Growing the Show with You

This show is ready to be booked for our September – December 2023 tour.

Shadow Girl Origins can adapt to different spaces. It can work in intimate environments within community spaces or libraries through to small-scale, studio-style performances.

We’re working with Manchester Libraries and Big Imaginations to ensure we’ve created a versatile storytelling show which can include wrap-round activities. A striking and small, tour-friendly set gives the performance focus, cocooning the action and making it feel like a true theatrical experience in any setting.

We will boost your link with our audiences and gain an understanding of your audiences to create connections that build new ambassadors for this exciting and important work.

Chrissy is enthusiastic to work with new venues in a wide variety of settings to bring the show to as many communities as possible.

To request further information about being involved and to book the show for your venue or event contact: tom@proudandloudarts.com

Shadow Girl – Origins is presented by Proud and Loud Arts and is made possible thanks to project partners M6 Theatre Company. In association with Big Imaginations Artist’s Imagination Fund, Z-arts & Manchester City Council.