You are in Home / News / Who wins… The game will decide

Who wins… The game will decide 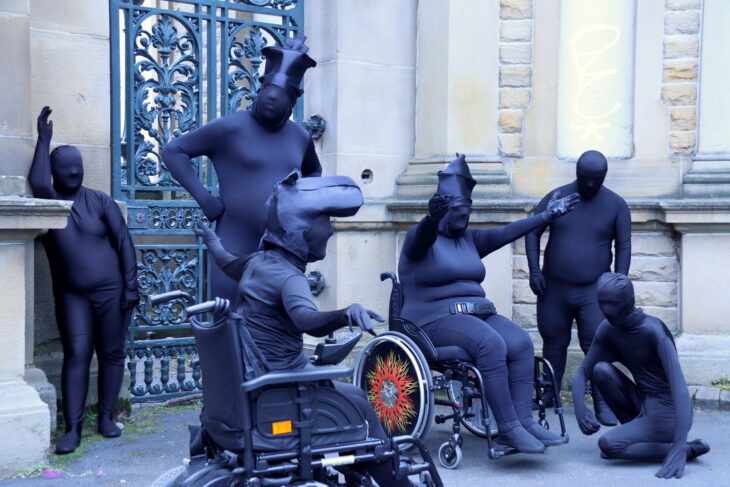 Danielle, Kelly, Chrissy, and Daryll here with all the Gambit gossip!

After a few years apart – we are back! Doing what we love to do – a spectacular ensemble performance to wow everyone who encounters us.

We’re in our final week of rehearsals for performance on the street Gambit, based on Chess – a game of strategy. It questions power and who is playing who.

We’ve rehearsed all over the city – at The Royal Exchange, HOME, Manchester Metropolitan University, Salford University, Media City, with the final stop at St Ann’s Square and surrounding areas.

You may be wondering what Gambit is and why we’ve been shouting about it on social media all month, well…

Gambit is essentially human chess pieces (us) roaming around St Ann’s Square generally up to no good, but in a playful way of course!

The opening of the piece is an ensemble movement sequence choregraphed by Susan Swanton-Guest which includes straight line formations, box turns, sharp turns, and stillness. The idea behind the ensemble piece is power, finding the right moment to make a move to come out on top.

The pieces then break off into small groups who play and interact with the environment and any audiences who happen upon us – expect to join in as we sneak, hide, play, and laugh.

Gambit will make sure that audiences see us as artists. As visible, creative, and powerful people.

We’ll see you on the board, checkmate.

Free: a playful intervention for you to encounter by chance in the city streets.

Gambit is co-produced with Word of Warning